Things You Need To Know About Co-working 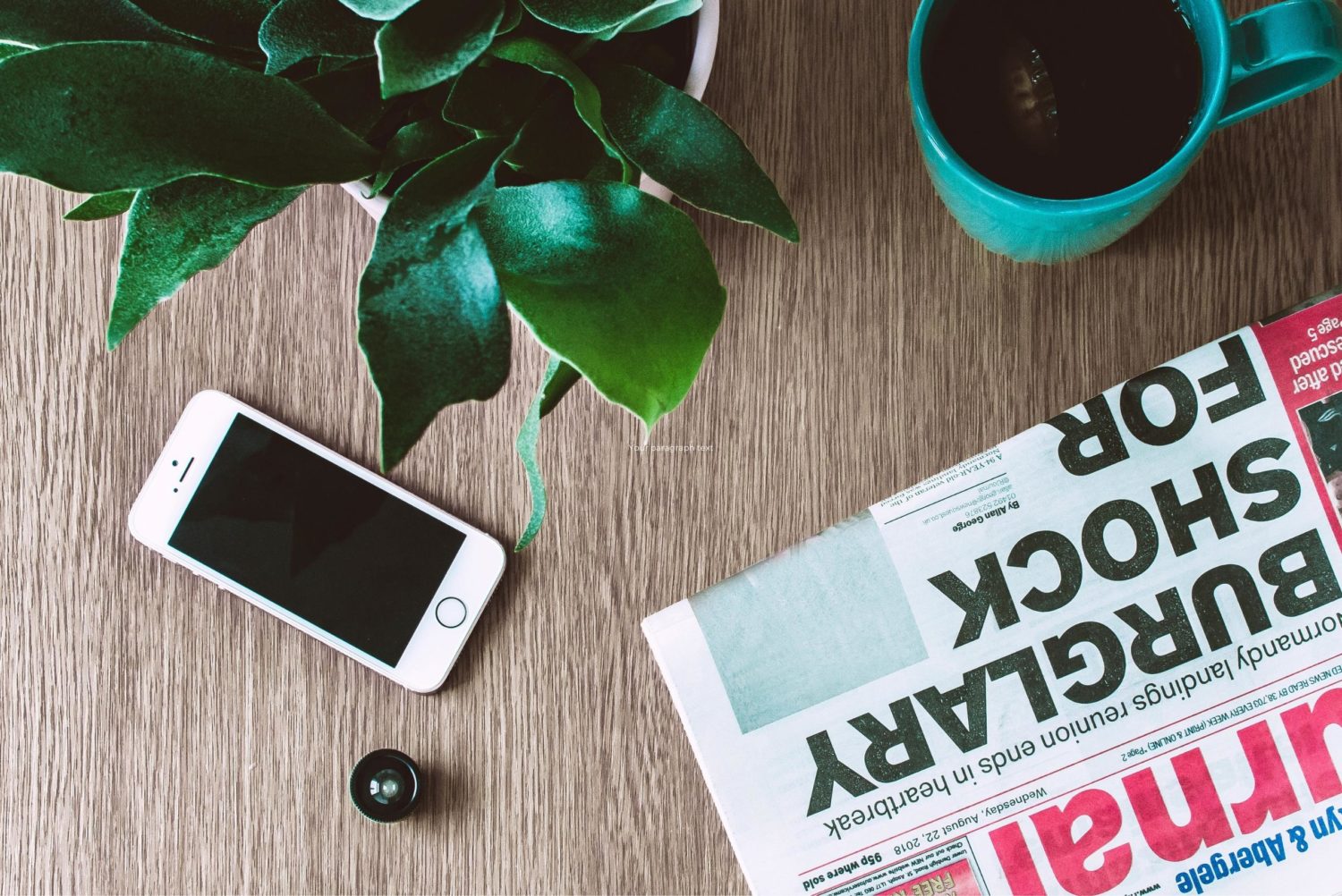 Here’s the latest sign that co-working spaces are going mainstream: They’re popping up in the suburbs.

Jennifer Blanchard Belk founded Loom in downtown Fort Mill because she found working from home too distracting and knew others felt the same way. She and her husband would sometimes end up at Starbucks at the same time, tapping away on their laptops.

Ryan McMahon, one of the founders of HB5 and Trinsik, works full time at Trinsik and helps to run the daily operations at HB5. “We couldn’t work at home,” she said, “because the dogs were there and the laundry’s there.”

Over in Concord, Ryan McMahon saw a way to capitalize on technology that allows people to work just about anywhere, so he and four colleagues founded HB5.

Both spots reflect the growth of interest in workspaces that allow people to work independently or collaborate in an environment designed to be more inviting than a traditional, cubicle-filled office. And both took inspiration from the growth of such spaces in center city Charlotte, which is home to more than half a dozen co-working spaces.
Read more here: charlotteobserver.com

Following designer youth hostels and style-conscious student housing, co-working spaces are now using elaborate interior design schemes to set themselves apart from the competition. The newest co-working space in Paris is Kwerk, a 24,000-square-foot, multilevel space that was conceived as a cross between a “boutique hotel, a theater set and an art gallery.”

Kwerk (a lost-in-translation mashup of the English words quirk and co-work) had a soft opening this month and launches officially in September. It is the second outpost and flagship of a co-working space partnership from Co-Founders Lawrence Knights and Architect Albert Angel that opened Kwerk’s first location in 2015 in Boulogne-Billancourt on the outskirts of Paris. Read more at slate.com

Parents seeking the ever-elusive goal of work-life balance will have a new option in Park Slope this summer.

A new company called CoHatchery will offer a combination co-working and child care program for eight weeks starting in July.

CoHatchery's mission is to "empower parents to pursue big careers without compromising parenthood," and co-founder Wendy Xiao says Park Slope is the ideal neighborhood to test its model.

"I just feel like this concept deserves so much attention," Xiao said. "For Park Slope parents, this is definitely something they need and want."

Clients will rent co-working desks at President Street and Seventh Avenue while their children do an afternoon of enrichment activities a block away on Union Street and Seventh Avenue. Parents will have the option of stopping by to visit their little ones at any time while they're working, and moms and dads can also join their kids for 30 minutes of parent-child "integration" activities. Read more at dnainfo.com

Naked Hub, the co-working office rental affiliate of Shanghai-headquartered resort operator naked Resorts, aims to open nine new locations in the city between now and the end of the year, bringing its total number of sites to 12.

“We really think Shanghai is the business and innovation capital of Asia,” naked Hub’s managing director Paul Hu said in a recent interview. “We think co-working isn’t just for start-ups. It’s the future of working. We have some really big companies that have put a team in here.”  Among them at naked Hub’s Nanjing Road location in Shanghai are GoPro, Bayer, and In-Bev, the owner of Budweiser beer.

Say the word "co-working" and more than a few people will picture an organization like 100state — a large, sleek downtown space lush with art, table space and laptops occupied by young, hip, tech-oriented entrepreneurs and freelancers.

PinkSpace Coworking, however, is in many ways the opposite of 100state. To be sure, it shares the same values at the crux of the co-working philosophy: it welcomes people into a shared open space to work independently of each other, with occasional collaboration mixed in.

That's where the similarities end.

PinkSpace is not located downtown. It's on Madison's east side, sharing a space in the Hops Museum on East Washington Avenue. The space is relatively small, and thanks to the museum's fixtures — barrels, plants, wooden cabinets with chipped paint — there's a rustic, DIY feel to it. In terms of furnishings and amenities, there's a couch and a few tables, a kitchenette, and WiFi.

According to Elaine Glowacki, PinkSpace's co-founder, those using the space are a very different sort compared to the membership of 100state.

Glowacki said she envisions the space as being for older people who don't necessarily want to be the next Mark Zuckerberg.

"I want to support the rest of us, the ordinary people who are trying to build a small business — not necessarily trying to get huge investor funding and get a huge multimedia dollar business," she said.

But perhaps most significantly, Glowacki sees PinkSpace as a space that puts a premium on the needs of women. The company was founded with a feminist mission of "helping women who are going through a professional transition."

The co-working business has appealed to everyone from millennials who do not need large office spaces and may not have enough credit for long-term leases, to more established companies like advisory firm KPMG that has 75 desks at WeWork’s Manhattan branch.

In New York City, the industry has grown to cover 5.2 million square feet, a 767 percent increase from just seven years ago, according to a new report by Newmark Grubb Knight Frank provided first to Commercial Observer.

Meanwhile, co-working spaces only comprise 1.2 percent of the office space inventory in the city, according to the report. So if the impact of this trend were to soften, as many skeptics suggest, it wouldn’t create a huge dent in the real estate market.

But the fact that co-working is growing is undeniable. Forty-four companies from WeWork to TechSpace opened new co-working spaces in the Big Apple between 2009 and 2016—and some co-working companies that rival traditional landlords in the city.

WeWork has grown tremendously from occupying a 42,604-square-foot space at 349 Fifth Avenue in 2010 when it first opened to 2.7 million square feet across 32 locations in Manhattan, Brooklyn, and Long Island City, Queens. Read more at commercialobserver.com

Under the skylights built into its vaulted ceiling, the 84,000-square-foot space will eventually host about 50 companies and 350 workers, according to David Ehrenberg, president of the Brooklyn Navy Yard Development Corporation. (Plus around 20 additional staffers on hand to run Lab operations.)

In addition to its offices and shared work environments, New Lab contains numerous high-end product design and manufacturing tools that entrepreneurs can use to prototype their creations.

The goal, Ehrenberg said on Tuesday, is to help companies "graduate" from the Lab, "take more space in the Navy Yard and create more jobs."

A total of two million additional square feet of rental space are coming to the Yard, Ehrenberg said. The Navy Yard currently has 7,000 workers, he said, but aims to host 16,000 by about 2020.

Building 128, the Lab's site, was used decades ago for ship building before the industry closed shop.

David Belt, the Lab's founder, said that when he first entered the then-disused structure in 2011, "It was still a ruin, but one of the most inspiring buildings I had ever been in." Read more at patch.com

To Join The Best Co-working Space In NYC 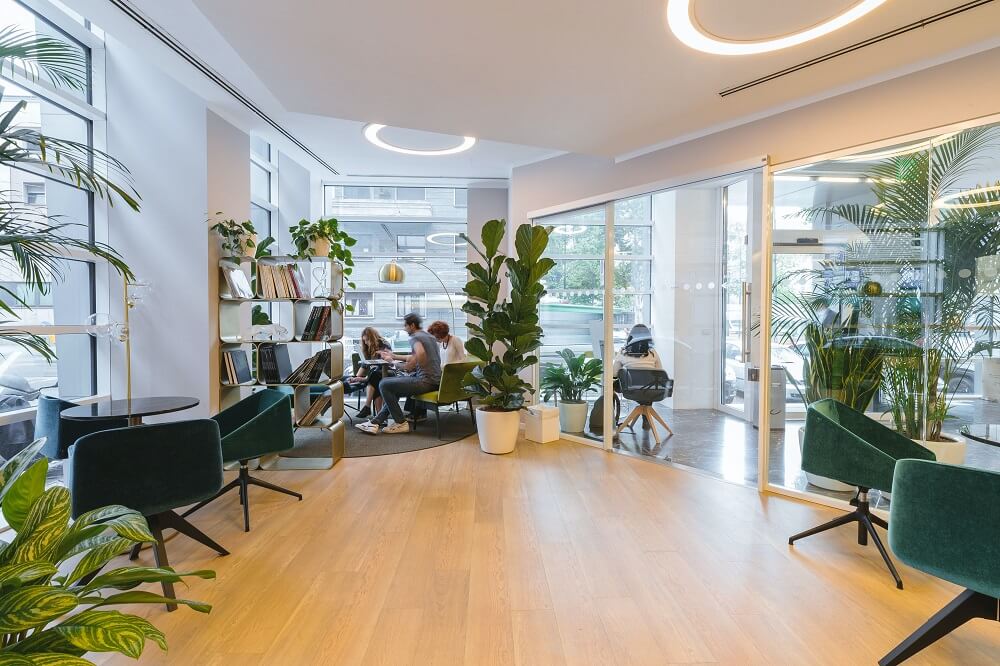 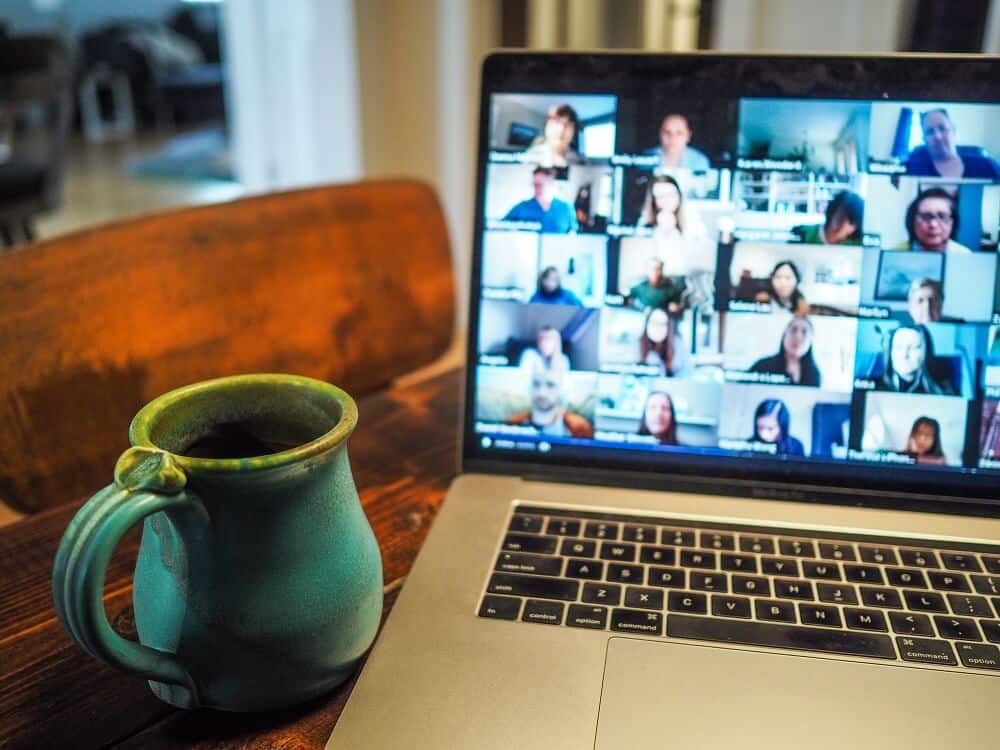 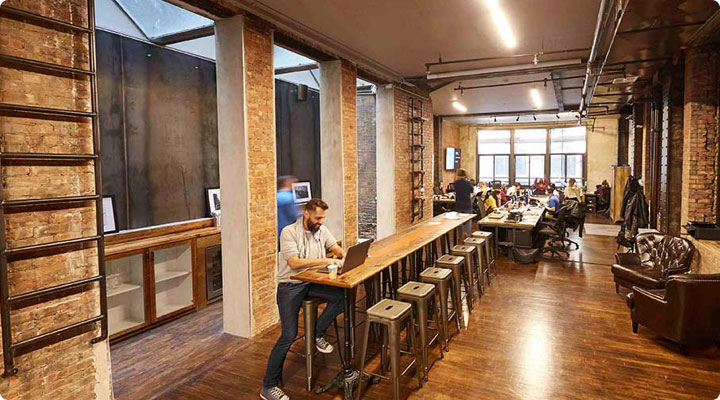